Today was Day 33 of the Finish Well Ride. We’ve ridden nearly 1,800 miles and are in the heart of Idaho.

I didn’t even know about the eclipse when I was planning my trip and here we are.

In the last few days I had no idea that Stanley, Idaho was a totality zone, but we ended up being there today because the fires in Montana forced me to change routes. Now we’re headed west first and then north toward Coeur d’Alene instead of north then west.

So circumstances blew us into the beautiful Sawtooth Mountains and into the direct path of the eclipse.

Just a little aside here, we’ve been blessed in each state by some wonderful hosts and Idaho is no exception. The Hotrums (Barry and Carol and their son Greg, who is home from China) not only took care of us in Pocatello, but set up a stay at their daughter’s house when they knew we’d be headed to Boise a few days afterward to take a rider to the airport. Amanda Holbrook and her family weren’t even going to be there, but they left the keys in the door, so to speak. Wonderful family.

Then we got to Hailey, Idaho and stayed with Paul and Sara Petit and the 10 guests they already had. We had a great time talking around the table at dinnertime and getting good advice on how to proceed. Paul wasn’t lying when he said we were going to ride through some beautiful country.

We all enjoyed our night’s stay at the Petit home. I’m just sorry we didn’t get to see a moose walk through the yard as frequently happens there.

God even answered a prayer of mine through the Petit party. I was having some slight asthma because of all the smoke in the air. I had asked the Lord a few days earlier that if this were going be an issue that He would take care of it. That evening at the Petits’, out of the blue Melia, a young, sweet, quiet mother of three, asked us if we had any problems with asthma because of the smoke. I hadn’t said anything to anyone except Cynthia. I told her I was having a bit of asthma and she gave me one of the five inhalers she had with her.

God amazes me. I took one puff and I’ve been breathing freely ever since.

Today was another day that God was amazing us. It was as if he were pointing out masterpieces in His creation one after another. The Sawtooth Mountains, the crystalline waters of the Salmon and Payette Rivers, the total solar eclipse …and His children.

We were about 10 miles from finishing our ride today when we stopped to step into the freezing waters of the Payette River. We were getting ready to ride again when a couple walked up to us and the woman asked us where we were headed today. Long story short, she and her husband were also believers. They prayed for us there in the parking lot, gave us some nutritious snacks for the road and donated to the Finish Well Ride. We parted with hugs as if we had known each other for years.

Alice and Wayne may have been God’s best masterpiece of the day. They encouraged us and reminded us that the power of the cross makes us instant family. 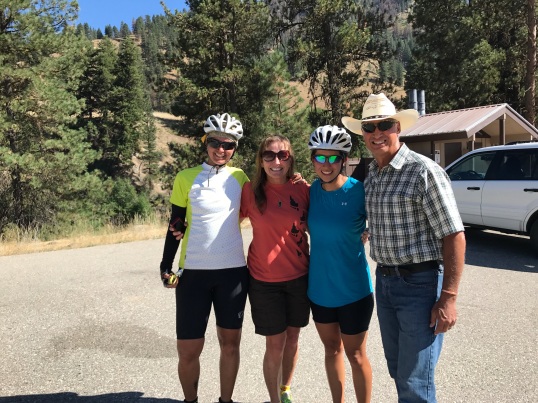 With Alice and Wayne.

And that’s what I’ve been thinking about all day: His physical creation is breathtaking. I’m in awe.

But His best work is the cross…