A quick trip to Izmir (formerly known as Smyrna) reminded me how easy it is to get around on public transportation in Turkey…easy and cheap.

The outward bound trip was a combination of ferry and train. The return trip was by plane. It ended up costing us about the same…and not because the ferry and train were super expensive, but because the flight was super cheap. $34 for an hour-long flight. We bought the ticket at the last minute too.

Anyhoo, we managed to get around Izmir pretty easily and out to Ephesus without any trouble at all. The public transportation in and around Istanbul is the same. 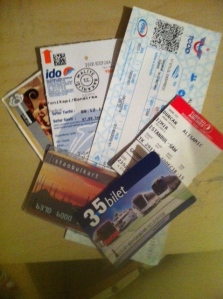 Whether trains, planes, ferries, metro, or dolmuş, getting around is easy in Turkey.

For the ferries, buses and metro you carry a card that you swipe to get on. It’s like a gift card, but you just keep refilling it as you use up the credit.

The dolmuş, however, is old school. It’s a smaller vehicle. Some are kind of like a mini-bus, with a few seats and lots of room to crowd in. On the dolmuş, you actually have to pay the driver, so he’s making change while weaving in and out of traffic. It’s great.

Another interesting thing about the dolmuş is that when people get on in the back they just send their money up with the passengers between them and the driver so it passes through sometimes seven or eight hands with accompanying stop information so the driver knows if change is required or not. He then makes change while dodging cars and pedestrians who decide to cross the road at that moment and while watching for anyone along the side of the road who might flag him down as he approaches. That change is passed back to the appropriate passenger.

It was like playing that game “teléfono discompuesto” (I forget what it’s called in English) where you send a whispered message down a line and see what you come up with at the end. The final version is often pretty comical.

I ended up just repeating exactly what my friends told me while handing the money to the driver. I had no idea what I was saying. Sometimes I got change to send back. Sometimes I didn’t. If the Turks who were handing the money up only knew how weak the last three links in the chain were, they’d probably send us to the back, but  somehow it worked out. And I didn’t hear any complaints, but I probably wouldn’t understand them if I had.

Anyway, it probably wasn’t as critical as our situation on our flight home last night. We happened to be seated in the row with the emergency door. The steward came by and spoke with us for about a minute. Not a word in English. At the end of it, I nodded my consent. He was satisfied.

I’m pretty sure I agreed that I was willing and able to open the hatch beside me in the event of an emergency, either that or he was making sure we were comfortable and letting us know there was a nice view from the window.

I decided I better look over the instructions in pictures just to be on the safe side.

The view from the ferry 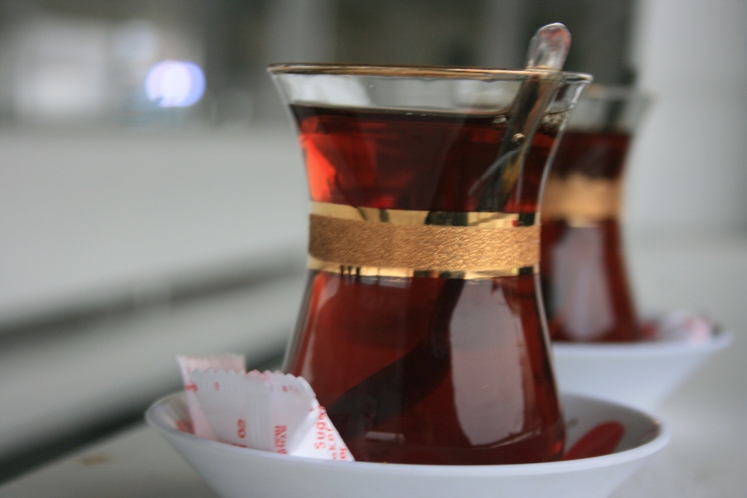 I’m going to miss Turkish çay on the ferry.

This is Istanbul. The famous maiden’s tower in the foreground and skyscraper construction in the background.

Cats are kings in Istanbul.

One week ago today I finished my Turkish language course. I took an exam and everything… I even passed it.

I’m pretty sure I learned as much Turkish in one month as I did of Spanish in a whole year of high school. Maybe that’s why they call the course “intensive.”

So I have my diploma and I have much more Turkish in my head than when I started. Let me just review what that does and doesn’t mean:

It DOES NOT mean I can talk politics or religion with any of the locals.

It DOES, however, mean that I can carry on a long conversation of about two minutes with the eight-year-old daughter of my host family. Of course, over the last month she’s learned to speak Tarzan Turkish to dumb it down for me. She now speaks with all infinitive verbs. The English equivalent would go something like: “You, me, to play, after, to eat” complete with a mini game of charades built in.

I actually know that conversation by heart because we have it every evening. That and the one about watching a Barbie movie…yes, in Turkish. And yes, I will be leaving Turkey with the music from “Barbie and the Secret Garden” stuck in my head. Now I just have to work on the words.

Having a diploma in first level Turkish also DOES NOT mean I should be making any phone calls in Turkish.

My travel companions, however, think it DOES mean that. Apparently the diploma earned me the designation of official translator on our excursion to Yalova last weekend. I ended up in charge of all the ticket purchases and general asking of directions and bus schedules, etc. It’s a wonder we didn’t end up in Syria.

I even had to call for a taxi. Anyone who has learned a second language knows the hardest thing to do is talk on the phone. You can’t see the other person and they can’t see you so pantomime is out the window.

Fortunately for me, we had already talked to the guy so he knew I might call.

The call went a little like this (but in Turkish):

Me: Ghengis? (yep, that was his name. Ghengis as in Ghengis Khan. Nice guy, by the way.)

And that, folks, got us a taxi at our front door 15 minutes later. 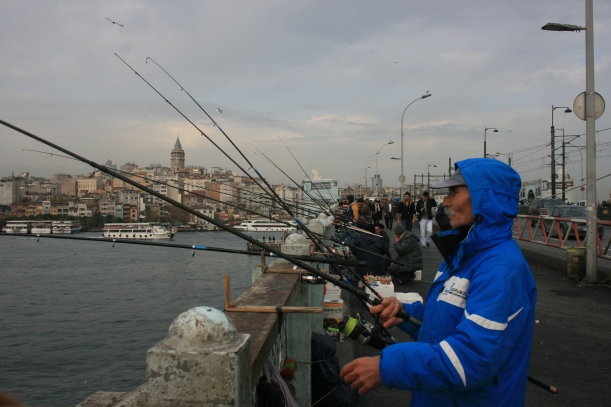 This is what they do here. And apparently fishing is good this time of year. 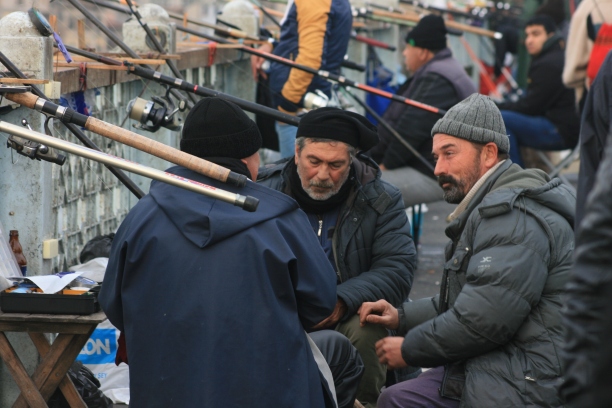 Looks like fishing is the same everywhere…just another excuse for the men to get together.

The fishing is above the bridge. The fish restaurants are below.

A ship en route to the Black Sea.

Not only is a place called “Pazar,” but a whole day of the week is called “Pazar.” Guess what people do on Pazar Day.

So I’m a little late posting for Thanksgiving, but just a little something I’ve been thinking about since then…
I managed to eat a proper American Thanksgiving dinner in Turkey…and yes, I ate turkey (the bird, not the country).
Not sure what kind of quirk of history or circumstance had Benjamin Franklin naming a bird in the 18th century after a people group (the modern nation was born after World War I)…or if it’s just a coincidence.
And now that I’ve learned a little Turkish, I’m even more stumped at why Turkey (the country, not the bird) calls Egypt “Corn.” The word is “Mısır.” I looked it up. An Egyptian guy studying Turkish at my school said he was surprised by that too.
Any etymologists there wanna tackle that one?
Meanwhile, could someone pass me the egypt…